- May 15, 2016
Some secrets have a way of putting down roots in our hearts and building up walls in our lives. Even though we move past these types of secrets, they are always there, haunting us and keeping us from experiencing true freedom.

I have had this type of secret for 17 years.

Even as I write this, I am doubting whether I should write this. But then I look to my Savior and I see how far He has brought me in these past 17 years and I know that He wants to set me free from the cage this secret has built around me. The way to freedom in this case, is transparency, because I may not be the only one with this dark secret and Jesus wants me to share the freedom I've found. I know this secret will shock many and possibly cause hard feelings from some, but I can't worry about that now. Not sharing my story at this point, would be much worse than sharing it.

17 years ago I got really, really sick. I was in bed for days and couldn't keep any food down. My mom took me to the doctor because I had been so sick for so long. That is where I found out that I was pregnant. It was a complete shock to me because I had never even considered that possibility. I was blindsided, embarrassed, confused, ashamed, and had never felt so alone.

As quickly as I found out that gut-wrenching news, I was taken to the hospital because I was severely dehydrated and needed fluids. I was also given drugs to help with the nausea that caused me to sleep for hours and hours. I barely remember even having a chance to process the news I had been given. I was able to call Bryan and tell him the news but even though he knew, I had to handle this situation on my own.

The very next morning, after being released from the hospital, I went to an abortion clinic. I've tried to block the memory so many times that its become hard to remember it clearly but I do remember the way I felt. Being there was the most surreal, horrible, shameful, hard, ugly, painful thing I have ever done.

I'll spare you all the details. No one needs to know what happens in one of those places. I will always wonder what would have happened if even one person had reminded me that there were other options, but no one did. Abortion felt like the only option for me. I wish they had shown me the ultrasound or let me hear the heartbeat, but they didn't. I cried a bucket of tears while I was there but everyone just acted like it was just another Wednesday (or whatever day it was).

That day was the day the shame became my constant companion.

I've shared openly about all the parts of my testimony, except for this part. I've hidden this down so deep that no one knew this about me. I haven't cared if everyone knew that I used to smoke cigarettes or taken all sorts of drugs or spent years drowning my sorrows in alcohol. God has redeemed those things, right? So why haven't I shared this part of my story? Why have I desperately tried to hide this skeleton in my closet? God is bigger than this sin too.

He has redeemed EVERY part of my life, even this.

"Shame has no place in the purpose, plan, and destiny God has for you. Because shame lies to us. It robs us of the very freedom we long for, and shackles us in the prison of our past" -Christine Caine

Today, however, chains have been broken. Shame has been lifted. Not because of anything I've done, but because of my Jesus. It took 17 years for me to believe it, but now I truly know, "that there is now no condemnation for those who are in Christ Jesus." Romans 8:1. The cross was enough. I don't have to carry this sin around, punishing myself repeatedly. Jesus did all that was needed. I am forgiven. I am loved. And I am FREE!

Today, I am grateful that God not only provided a way for me to be fully forgiven, but He also longs for me to truly understand all that comes with that forgiveness. He wants so much more for me. He doesn't see me as a failure or a screw up, a murderer or a drunk. When His eyes fall upon me, He sees His righteous, redeemed daughter. I am His.He wants me to truly KNOW it, to feel like it and act like it.

Yes, I've had a secret for 17 years.
I've been ashamed and afraid for anyone to know this part of my story.
I'm no longer ashamed because the ONLY ONE THAT MATTERS has forgiven me and wants me to declare my freedom from these chains. He is so good, so faithful, so amazing. That he would want even me, I can't even wrap my mind around it. That He would allow me to marry the boy that got me pregnant, so that 17 years later we could walk in freedom together, absolutely amazes me. And that He would so graciously give us three perfect little boys, will always cause a lump in my throat.
He is everything to me. Jesus.

I don't know if anyone else has a story filled with shame but if you do, don't let it keep you from experiencing the freedom that Christ can give you. There truly is nothing like trusting Him and obeying Him, even if other people won't understand it. He will minister to your heart and restore your soul. He will cause light to fill the places that once were dark. He will bring beauty from what was once so ugly. And I promise, you won't regret letting Him heal the shattered parts of your heart.

Just like with my secret, the cage your secret has built around you, is ALREADY open, you just have to climb out into His faithful arms.

Please take the time to leave an encouraging message

Popular posts from this blog

Please don't give me a wedgie! 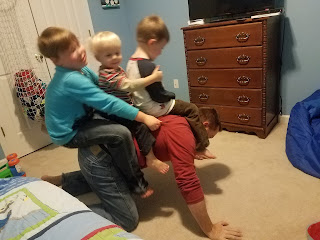 Would you believe me if I told you that life with 3 boys is wild??  You probably would, huh? I'm telling you, just an average Wednesday night in the Shaw household is full of all sorts of craziness! I did hear a first tonight though!  Bryan was wrestling with the boys and suddenly Dylan starts yelling "Please don't give me a wedgie!" Now by those words, you would assume that he didn't want a wedgie but the way he was shaking his booty in front of Bryan and laughing, proved that he really did want a wedgie! HA! Then, of course, Evan and Tyson started saying, "Please don't give me a wedgie!" (One in English, one in toddler language) So we had three little boys running around shaking their tail ends and begging for wedgies.  There. Is. Never. A. Dull. Moment. As you can see from this picture above, they got their wedgies! They thought it was hysterical! And I just had to show you the picture below, just to give you an id
Read more

For the  Lord   God is a sun   and shield;      the  Lord  bestows favor and honor; no good thing does he withhold      from those whose walk is blameless.  Lord  Almighty, blessed  is  the one who trusts in you Psalm 84: 11-12 I've been pondering Psalm 84:11-12 for a couple of weeks now. It has become one of my favorite verses. After really digging into this verse on my own and in Bible study this morning, I feel like God speaks volumes through these 38 simple words.  God is a sun and a shield. Like the sun, God provides for us, nourishes us, and is always present. The sun provides hope with each new day, just as God gives hope in even the worst situation. Like a shield, God protects us and gives us security. We can hide behind Him and feel safe. But, a shield does no good just laying near by. It only protects when picked up and used appropriately. The same is true with God. If we don't acknowledge Him, if we don't get to know Him, if we don'
Read more

I have heard the term "beauty from ashes" a thousand times in the past week. It wasn't the first time I 've heard the term but I've always just brushed it off. Since I've heard it so much lately, I decided to pay it some attention.  So here we go... The Bible says in Isaiah that God will give us beauty instead of ashes. In Biblical times it was the custom for people in great times of mourning and difficulty to lay down in ashes. Just imagine this...you’ve got a big problem in your life so you just lay down in a pile of dirty ashes. There is absolutely nothing beautiful about this scenario. So where does the beauty come from? Can ashes really be turned into something beautiful?   Scripture says that God is able to take the situation that burdens you or causes you pain and turn it into beauty. He can pick you up out of the ash pile of life and make something beautiful out of you. The Hebrew word for ashes is epher and the Hebrew word for beauty is pheer. Just m
Read more

I Had A Secret For Seventeen Years 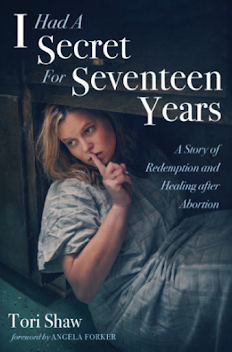 Get your copy of Tori's book today!

"Gratitude can transform common days into Thanksgivings, turn routine jobs into joy, and change ordinary opportunities into blessings." ~ William Arthur Ward
"Give thanks in all circumstances; for this is the will of God in Christ Jesus for you." 1 Thessalonians 5:18